According to the NSF webpage, the Graduate Research Fellowship Program (GRFP) recognizes and supports outstanding graduate students who are pursuing full-time research-based master’s and doctoral degrees in science, technology, engineering, and mathematics (STEM) or in STEM education by providing three years of support.

The four alumni are working or doing research in the economics field. Hamerling is a senior research analyst in the Federal Reserve Bank of New York’s Research and Statistics Group, Torola is a pre-doctoral fellow with the Tobin Center for Economic Policy, while Jimenez and Li are both serving as pre-doctoral fellows at MIT.

Jimenez is a pre-doctoral research fellow at the School Effectiveness and Inequality Initiative (SEII), where his work centers around estimating the causal effect of attending schools in large urban school districts that use centralized assignment systems. “I wanted to gain further training in applied econometrics research, which I thought would be important preparation before starting my Ph.D. in Economics,” he said. “By working as a full-time Research Fellow after graduating, I also sought to gain a more holistic understanding of the research process.”

When asked if he had advice for future GRFP applicants, Jimenez suggested seeking undergraduate research experience during the school year or the summer to strengthen a candidate’s application.  He shared that doing so will signal experience and a commitment to research and will help candidates in understanding how to write an “ambitious but feasible research proposal.” Two examples of such opportunities he recommends are the Tobin Undergraduate Research Assistantship and the Herb Scarf Summer Research Opportunities.

Like Jimenez, Li is a pre-doctoral research fellow at MIT working on issues in healthcare economics and public finance with Economics Professor Amy Finkelstein. When pursuing the pre-doctoral position, Li said he was influenced by theoretical courses he took while at Yale. ”Some important courses, including two independent studies (one in computer science with Professor John Lafferty and one in economics with Professor Truman Bewley), convinced me that it was essential to learn more about how institutional settings shape the data we collect and how to thoughtfully work with empirics,” he said.

When the GRFP selections were announced, Li said he was awoken by his roommate, who happens to be Jimenez, celebrating upon hearing the pair were awarded fellowships.

Torola works closer to home as a Tobin Pre-doctoral Fellow under the guidance of Professor William Nordhaus. She is assisting on two projects: the G-Econ project which involves creating a geographical dataset of economic activity around the globe; and the Yale Labor Survey which tracks the state of the U.S. labor market.

“I thought that a pre-doctoral fellowship would be a great way to see whether in fact I would like to pursue research in economics as a career,” said Torola. “My degree is in Ecology and Evolutionary Biology, and I previously worked in public health research, so this decision represented the culmination of thinking hard about and exploring how I want to contribute to making the world a better place.”

Receiving a B.A. from the University of California, Berkeley in 2018,  Stacy is a pre-doctoral associate with the Economic Growth Center.  She is interested in working on real-world issues in development. For others interested in applying for the GRFP, she advised to, “look for research inspiration in their current work, and aim for questions that would be interesting even to people outside academia.”

The only undergraduate student selected for the award, Vod Vilfort, will be starting an Economics Ph.D. program in the fall, and is still weighing his options between programs. While it is a bit premature what topics Vilfort will study, he is interested in socioeconomic inequality. “I see myself doing research on issues relating to education, economic mobility, and maybe even urban economics. I am also interested in studying econometrics and using the tools of econometrics to study applied issues,” he said.

Giving credit where credit is due, Vilfort said he was appreciative of Yale Professors Ebonya Washington, James Choi, and Eduardo Davila, as well as Jeffrey Wooldridge from Michigan State University. “It is a great honor to be selected for the award. I am grateful to a number of advisors who supported me during the application season for graduate programs and fellowships,” he said.

Likewise, Torola said she was honored and excited to receive the reward. “I think it means that the NSF thinks what I proposed (a project examining sub-national effects of climate/weather on economic growth in a way that accounts for spatial dependence) would be useful and important work!” she said. “And I also feel grateful to have had amazing mentors to help me think about the proposal.”

Thankful for the invaluable support from the professors he studied under at Yale, Li said, “In particular, I wouldn’t have embarked on this path without encouragement and support from Giuseppe Moscarini.”

Jimenez said, “I am extremely grateful to my undergraduate research supervisors at Yale Economics, Fabrizio Zilibotti and Kevin Williams, for their guidance and support, which was invaluable for my application to the NSF GRFP.”

The NSF awards approximately 1,600 Graduate Research Fellowships per fiscal year. Each Fellowship provides three years of support during a five-year fellowship period. For each of the three years of support, NSF provides a $34,000 stipend and $12,000 cost of education allowance to the graduate degree-granting institution of higher education for each Fellow who uses the support in a fellowship year. The Fellowship award is made to the institution of higher education at which a Fellow is enrolled and the institution is responsible for disbursement of the stipend to the Fellow.

The GRFP’s purpose is to “help ensure the quality, vitality, and diversity of the scientific and engineering workforce of the United States,” and encourages women, underrepresented students, persons with disabilities, veterans, and undergraduate seniors to apply.

Additional information on the program and full list of Fellow candidate and Honorable Mentions can be found on the GRFP website. 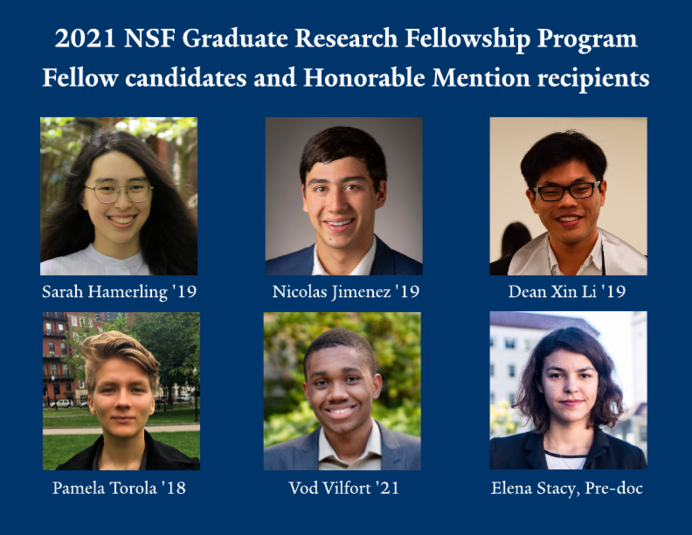