Congratulations to the 2022 Senior Essay Prize Nominees and Winners! 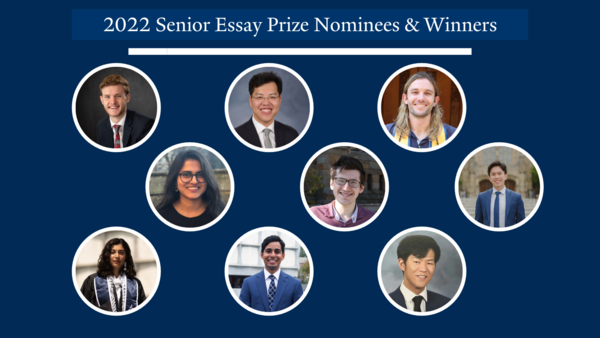 Each year, 30-50 students write a senior essay in economics. This year, these essays spanned topics across all fields of economics, including unemployment benefits, auction design, international climate agreements, child labor, and college admission policies. The top essays are nominated for prizes by the student’s advisor and a second reader from the department. A committee of Economics faculty members read and select the winning essays, and the prizes are awarded on commencement day during the students’ respective college ceremonies.

The Dickerman Prize for the Best Senior Essay goes this year to two recipients: Kamila Janmohamed (“Estimating Policy Effects with Staggered Implementation and Multiple Periods: Another Look at Family Caps”) and Jack Hirsch (“Optimal Auction Mechanisms in the Presence of Regret”). The Meltzer/Awdziewicz Prize goes to Michael Barresi (“Unilateral Carbon Policies and Multilateral Coalitions: An Analysis of Coalition Stability under the Optimal Unilateral Policy”). The Ellington Prize for the best essay in finance goes to Brian Zhu (“Regime-Switching Factor Models with Applications Portfolio Selection and Demand Estimation”).

Yale College also awarded the Wrexham Prize for the best senior essay in the Social Sciences to Kamila Janmohamed for her above-mentioned essay.

The essays for all the nominees and winners are posted below:

This essay derives a theoretically optimal unilateral carbon tax for a multi-country world and quantifies the performance of that tax in light of the free-rider problem by calibrating the theoretical solution to real world data.

This essay explores the effect of unemployment insurance (UI) on the quality (rather than quantity) of employment, focusing on the broad-based policies enacted in response to the COVID-19 pandemic. Using micro data from the Current Population Survey and a new dataset with more precise estimates of UI receipt, the paper finds that the pandemic-era UI supplements had no significant effect on reemployment job quality.

This paper considers an auction model that incorporates a penalty for regret into bidder utility functions to study how bidders change their bidding strategy, and how those changes affect the seller’s revenue. The essay classifies the full family of mechanisms that maximize seller revenue and characterize the effects of regret on optimal bidding behavior and seller revenue of several commonly employed auctions.

This paper applies recent advances in the differences-in-differences literature to evaluate the effects of family caps: a set of policies that freeze US welfare recipients’ benefits at a level based on the size of their family when they began receiving welfare. By exploiting variation in the timing and stringency of their implementation, Kamila finds that family caps have failed to achieve their stated aims and may be counterproductive.

This paper examines increasingly prevalent “test-optional” college admissions policies, whereby students need not send their SAT or ACT scores to gain admission. Jack developed a method to estimate the causal impact of switching to test-optionality on the composition of admitted students, and applies this method to a proprietary data set from a test-optional college.

This project measured the effect of childcare center closures on individuals’ labor market decisions, for instance, their likelihood to reduce hours or leave the labor force altogether. It also examined how government aid affected a childcare center’s likelihood of permanent closure during the pandemic.

This paper uses locality-level panel data from the Palestinian Labor Force Survey (PLFS) to study the effect of the Palestinian-Israeli conflict on child labor among ten to fourteen-year-old individuals in the West Bank between 1999 and 2016. The analysis combines data on conflict-related violence (e.g. fatalities and prisoners) and conflict-infrastructure (e.g. checkpoints and the separation wall) to construct various accurate measures of an individual’s exposure to conflict intensity. Exploiting the temporal and geographical variation in these measures, Salma shows that multiple aspects of conflict affect child labor in different directions and with different magnitudes.

This paper analyzes the effect of information-intensive job growth on wages, amenities, and housing costs for high- and low- skilled workers in metropolitan statistical areas across the United States.

Regime-switching factor models (RSFMs) are useful in capturing the cyclical nature of returns in certain asset classes. In this essay, Brian presents closed-form update rules for expectation-maximization algorithms used to estimate RSFMs, and shows how their regime-switching framework has applications in portfolio selection and demand estimation.

Congratulations to all of these seniors for their exceptional accomplishments!