When Yale economist Joseph Shapiro was a graduate student at the Massachusetts Institute of Technology about a decade ago, he attempted a cost-benefit analysis of the 1972 Clean Water Act — the federal law governing water quality in the country’s rivers, lakes, and streams.

The law was a ripe topic for economic analysis. Since its passage, government and industry had spent more than $1 trillion to reduce water pollution, or over $100 per person per year, yet there was little research on the subject, Shapiro said.

“Many influential economics papers study air pollution policy, but far fewer study water pollution policy, and it seemed like an asymmetry that could be fixed,” said Shapiro, an assistant professor of economics. “In this case, there was a reason for the asymmetry: It was extremely difficult and time-consuming to obtain extensive data on water pollution and the regulations of the Clean Water Act.”

Shapiro and his co-author, David Keiser — previously a Ph.D. candidate at the Yale School of Forestry and Environmental Studies and now an assistant professor of economics at Iowa State — made the effort. It involved a nearly decade-long quest to track down datasets, including several that had never been used in scholarly research. They compiled data on water quality covering many of the approximately 3.5 million miles of U.S. rivers and streams over 40 years. They needed to learn where each river and stream is located relative to each other and to the nation’s 15,000 wastewater treatment plants. They sought data on thousands of federal grants for water pollution abatement projects as well as information on sources of pollution. They acquired data on housing values near waterways subjected to abatement projects — information that would help them disentangle the cost-effectiveness of the grants with how much people value living near cleaner rivers and streams.

The researchers persevered through numerous dead ends. They filed multiple requests under the Freedom of Information Act for government datasets. They worked with a programmer to develop software to help them make sense of massive amounts information. Eventually, they had compiled the most comprehensive record on water pollution that exists in academia — more extensive than any single dataset kept by the federal government — including 50 million water-quality readings from 170,000 monitoring sites.

Their paper, “Consequences of the Clean Water Act and the Demand for Water Quality,” is conditionally accepted for publication in the Quarterly Journal of Economics. Its findings are already being taught at multiple universities, and have been cited in congressional testimony. 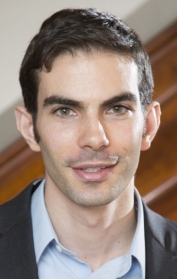 This month, Shapiro received a $65,000 Sloan Research Fellowship to support his work. In October, he was awarded the Arthur Greer Memorial Prize for Outstanding Scholarly Publication or Research, which is presented annually to a junior faculty member in the natural or social sciences.

“Joe’s star has risen steadily since he joined the Yale economics department in 2013,” said Dirk Bergemann, chair of the Department of Economics. “He has excelled in every aspect of his academic career, from research to teaching. His sharp intellect is evident in both the quality of his research and his seminar presentations, which display a depth and clarity of thought rarely seen at such early stage of career.”

Shapiro grew up in Portland, Oregon. Environmental issues — including controversies between the plight of the spotted owl and timber employment, and between protecting the region’s salmon population and increasing electricity generation from hydropower — frequently appeared on the front page of local newspapers, which helped spark his interest in energy and the environment.

Shapiro said he enjoys belonging to Yale’s vibrant group in environmental economics, which includes William Nordhaus, Sterling Professor of Economics and a pioneer in applying economic analysis to climate-change.

A paper he co-authored with Reed Walker, assistant professor of economics at University of California-Berkeley, seeks to understand why manufacturing pollution emissions have declined by 60% since 1990 despite a substantial increase in manufacturing output over the same period. They analyzed confidential data on all the products U.S. manufacturing plants produced between 1990 and 2008.

“Scholars had performed this kind of analysis before but with less detailed public data,” he said. “We used administrative data distinguishing more than 1,000 different products.”

The paper, conditionally accepted for publication in the journal American Economic Review, concludes that manufacturers are generating products composed of the same materials as before but using cleaner techniques, explaining the reduction in pollution emissions. Further analysis showed that environmental regulations drove the transition to cleaner methods more so than other factors, such as changes in trade or productivity.

In their study of the Clean Water Act, Shapiro and Keiser found that pollution levels have fallen significantly since 1972, but were declining at an even faster rate before the sweeping law was enacted. They found that federal grants to wastewater treatment plants have contributed to declining pollution rates. Finally, they showed that the increase in housing values near treated rivers was smaller than the costs of the abatement grants.

“If you have information on locations where the net benefits of a policy are relatively greater, targeting the policy towards those areas is likely to increase its social value,” he said. “For example, the Clean Air Act has more stringent regulation in areas with many people and where air pollution is more costly. By contrast, the Clean Water Act regulates waters everywhere with more similar stringency. Re-targeting it could increase its net benefits.”