Janet Currie to Present on Medical Decisions at 2018 Koopmans Lectures

The Cowles Foundation is proud to present Princeton University Henry Putnam Professor of Economics and Public Affairs, Janet Currie, as this year’s speaker for the Tjalling C. Koopmans Memorial Lecture Series on April 24-25, 2018.

Currie will give two talks over the two-day period. Her ﬁrst talk titled “Medical decision making and physician performance” is on Tuesday, April 24 at Luce Hall at 4:00 PM. This talk is open to the wider community with a reception immediately following. On Wednesday, April 25, she will present “Small Area Variations and Physician Decision Making: The Case of Depression,” as part of the departmental Cowles Lunch Talk series held in the Tobin Lounge at 28 Hillhouse at noon. 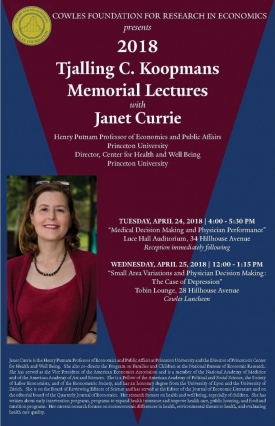 Faculty and grad students also have the opportunity to meet with Currie one-on-one during her stay. Those interested can sign-up on this schedule sheet (CAS login required).

Currie is the co-director of Princeton’s Center for Health and Wellbeing, and also co-directs the Program on Families and Children at the National Bureau of Economic Research. She has served as the Vice President of the American Economics Association and is a member of the National Academy of Medicine and of the American Academy of Art and Sciences. She is a Fellow of the American Academy of Political and Social Science, the Society of Labor Economists, and of the Econometric Society, and has an honorary degree from the University of Lyon. She is on the Board of Reviewing Editors of Science and has served as the Editor of the Journal of Economic Literature and on the editorial board of the Quarterly Journal of Economics.

Her research focuses on health and wellbeing, especially of children, and has written about early intervention programs, programs to expand health insurance and improve health care, public housing, and food and nutrition programs. Her current research focuses on socioeconomic differences in health and access to health care, environmental threats to health, and mental health.

The memorial lecture series was created in honor of Yale Economics Professor and Nobel Laureate, Tjalling C. Koopmans, who, consequently, was also instrumental in moving the Cowles Foundation from the University of Chicago to Yale in 1955. The biennial event is intended to bring leading scholars to Yale who are working in areas of interest similar to, and in the spirit of, Professor Koopmans. The lectures are made possible by a special, generous gift from Truus W. Koopmans to Cowles to honor Professor Koopmans’s memory.