The Department of Economics is premiering a new video called, “Why Choose Yale Economics?” targeting potential majors and students of interest. The five-minute video shows interviews with economics majors, alumni, and faculty members to highlight the many paths students can take majoring in economics. What’s more, the video puts to rest some of the stereotypical career paths economics is thought to foster by showing how pervasive economics is in other fields and industries.

The video is the creation of two undergraduate students (now graduated), Wayne Zhang (‘19) and Briana Burroughs (‘18). The year-long project, was the brainchild of Economics Professor and Director of Undergraduate Studies (DUS), Ebonya Washington, who also had oversight of the project from start to finish.

“I was really happy with the end product!” said Zhang who teetered on an Economics major, but eventually ended up with a degree in Political Science. “I think in my own process of working on this video, I was able to deconstruct my own preconceived notions that I had about the department - honestly, had I done the video earlier in my Yale career, I might have stuck with being an economics major.” 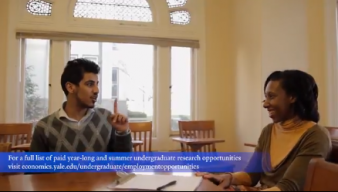 Zhang takes the audience to several locations when interviewing the students and faculty members. ”Something that I loved seeing was just the sheer amount of different places that we were able to get footage of: whether it was the hospital, the Fed in NY, a lecture at the law school, or just a plain classroom,” said Zhang. “Also, I met a lot of people working on things in economics that were fascinating, ranging from healthcare, to behavioral psychology, to tech.”

Also excited about debuting the video is Professor Washington, who said, “I wanted students considering economics to get a sense from students who had finished the economics major of the variety of things one can do during and after an economics major.” She hopes to showcase the video at academic fairs and other departmental events to help give perspective students a sense of the major.

“I really think DUS Ebonya Washington is going to make the department more accessible by focusing on the different applications of economics,” said Zhang. “My hope is that the video will also help people who are already majors find new and exciting things about the things that they’re already studying.”

The video can be viewed on the Yale Department of Economics YouTube channel or seen below.