T.N. Srinivasan: economist was a powerful voice for economic reform in India

Thirukodikaval Nilakanta “T.N.” Srinivasan ’60 M.A. ’62 Ph.D., the Samuel C. Park Jr. Professor Emeritus of Economics at Yale and a leading intellectual force behind India’s economic liberalization, died on Nov. 11 in Chennai — a city on India’s eastern coastline. He was 85.

“T.N. was a distinguished economist and a scholar of the first order, completely devoted to principle and rigor,” said Dirk Bergemann, the Douglass and Marion Campbell Professor of Economics and chair of the Department of Economics. “He was a beloved member of the department for more than 50 years, since he first arrived at Yale as a graduate student. He has been greatly missed here since his retirement in 2011.”

Srinivasan’s erudition and charm were immediately apparent to his students and colleagues, whether he was speaking at a seminar or holding forth at regular morning coffee sessions with distinguished colleagues, such as James Tobin, Tjalling Koopmans, Herbert Scarf, and William Nordhaus, Bergemann said.

“T.N. was in many ways an ideal colleague and mentor as well as a model of a scientist with a global sense of responsibility,” said Mark Rosenzweig, the Frank Altschul Professor of International Economics and director of Yale’s Economic Growth Center. “What I most admired about T.N., besides his important scientific contributions to international trade and development economics, was how the rigor of his scholarship extended to his many discussions with high-level policy-makers, government bureaucrats charged with data collection and dissemination, colleagues and students.”

Srinivasan insisted on the same high standards of analysis for making policy, data collection, formulating theory, or empirical work as he applied to his own scholarship, Rosenzweig said.

“He was not shy in making his views known in a clear manner to any of his international or Yale audiences,” Rosenzweig said. “But all of his conversations, no matter with whom, were characterized by good humor and warmth.”

Over the course of his career, Srinivasan, who was also professor emeritus of international and area studies, made numerous important contributions to the theories of economic growth, international trade, applied general equilibrium, political economy, nutrition, income distribution, and contracts.

Christopher Udry ’91 Ph.D., the Robert E. and Emily King Professor at Northwestern University and Srinivasan’s former student and colleague at Yale, called his former thesis adviser “a giant of the economics profession.”

“For me, as his student and later his colleague, T.N. embodied scholarship, intellectual integrity, and insistence on logic and coherence in argument,” said Udry, a development economist and a member of Yale’s economics faculty from 2004 to 2017. “He set an example of serious inquiry and rigor that was both inspiring and daunting. He passionately cared about ideas and is famous for his bluntness in intellectual discourse. At the same time, he was extraordinarily thoughtful, kind and even gentle as an adviser. He let me know when there were flaws in the work I produced, but he also encouraged exploration, taking chances, and trying new approaches. He was a model adviser and mentor, someone I could rely on throughout my career. I’m going to miss him. ”

With renowned economists Jagdish Bhagwati and Padma Desai, Srinivasan is credited with developing the intellectual framework for liberalizing India’s economy. He supported a series of reforms initiated in 1991 that reduced import tariffs and taxes, deregulated markets, and opened India to increased foreign investment. He examined India’s economic system and advocated for policy reforms throughout his career.

“Anyone in economics can tell you about T.N.’s vast contributions to the scholarly literature,” Udry said. “His was a vital and influential voice for Indian economic reform — through his intellect and his passion he helped shape economic policies that improved the lives of hundreds of millions of people. He was satisfied neither with the pace nor extent of the reforms, but his impact was real and positive.”

In 2007, Srinivasan was awarded the Padma Bhushan Award — among India’s highest civilian honors.

He wrote or edited 11 books on various aspects of his native country’s economy, including “Foreign Trade Regimes and Economic Development: India,” and “India’s Economic Reforms,”with Bhagwati in 1975 and 1993, respectively, and “Reintegrating India with World Economy, with economist Suresh Tendulkar in 2003.

“T.N., as Professor Srinivasan was known given his long first name — which, according to South Indian custom, was in fact that name of the village he came from — was not just a great economist but also a hugely generous scholar who extended a helping hand through timely commentary on their manuscripts to countless aspiring young economists around the world,” said Bhagwati, University Professor of Economics and Law at Columbia University.

In collaboration with economist Hollis Chenery, Srinivasan co-edited the first two volumes of the influential “Handbook of Development Economics.” He co-edited the third volume in the series with Jere Behrman in 1995.

Born in 1933, Srinivasan earned a B.A. in mathematics from the University of Madras, India, in 1953. He received a master’s degree from the same institution the following year and subsequently embarked on two years of training in statistics at the Indian Statistical Institute in Calcutta. 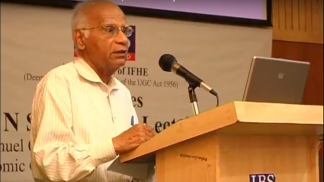 As a graduate student at Yale, he was mentored by Koopmans, winner of the 1975 Nobel Prize in Economics, and worked as a research associate at the Cowles Foundation for Research in Economics.

After earning his Ph.D., he served on the faculty of the Indian Statistical Institute and, during the late-1960s and 1970s, had stints as a visiting professor at Stanford University, the Massachusetts Institute of Technology, and Johns Hopkins University. He served as special adviser to The World Bank’s Development Research Center from 1977 to 1980. He joined Yale’s faculty as a full professor in 1979 and served as chair of the Department of Economics from 1997 to 2000.