Four economics majors were awarded the 2018 Tobin Scholar Prize for their outstanding performance in economic core theory courses. The recipients are Narek Alexanian, Berkeley College; Sarah Ngo Hamerling, Branford College; Nicolai Parks, Trumbull College; and Jackson Simon, Saybrook College. In recognition of their accomplishment, the students recived a cash prize and were honored at a luncheon.

The seniors were treated to lunch at Mory’s Club on October 25, and were accompanied by Professors Ebonya Washington and John Geanakoplos, Professor Emeritus Bill Brainard, and Department Chair, Dirk Bergemann. The prizes were awarded to each student by the prize co-founders Chief Investment Officer David Swensen (Ph.D. ‘80) and alumnus Stephen Freidheim (B.A. ‘85), both of whom studied under the prize’s namesake James Tobin.

“I felt deeply honored for the recognition of my academic efforts by the department,” said Narek Alexanian. “Since the award pays homage to J. Tobin, one of the greatest economists of Yale, I feel especially encouraged and inspired to continue my study of economics by pursuing a graduate degree or a position in an industry related to economics.”

Sarah Ngo Hamerling said she was surprised and very grateful to receive the scholarship. “James Tobin’s name crops up in a lot of places in the department, including the RA program; I’d always assumed that this was just because he was a famous Yale economist,” said Ngo Hamerling. “It was wonderful to hear instead that the scholarship was named after him not only for his academic contributions but also for his mentorship and support of younger economists.”

When asked what aspect of the economics major Alexanian and Ngo Hamerling like the most, Alexanian said he enjoys the analysis of equilibria. “It is remarkable that human interactions, as any other isolated physical system, tend to an equilibrium, the existence of which can be proven under simple assumptions and a few lines of mathematical ingenuity.”

“Even though the economics major is huge at Yale, I really appreciate how supportive individual professors can be, showing so much care and excitement for mentoring students who are interested in the field,” said Ngo Hamerling.

Both Alexanian and Ngo Hamerling have aspirations to pursue advanced degrees in Economics. ”I feel especially encouraged and inspired to continue my study of economics by pursuing a graduate degree or a position in an industry related to economics,” said Alexanian.

Ngo Hamerling said she will be working for two years as a research analyst in financial intermediation at the New York Fed after graduation before pursuing a Ph.D. in economics. Eventually, she hopes to have a career in policy or academic research. 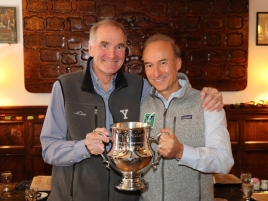 The annual prize was established in 2012 and is awarded up to four senior majors in Economics or Economics and Mathematics who have excelled in core theory economics courses. The award’s namesake, James Tobin, was a prominent member of the Department of Economics at Yale from 1950 to 2002, and the recipient of the Nobel Prize in Economics in 1981.

“There is a renewed buzz on campus about the great man behind the prestigious prize, which has been so enjoyable for me to witness and in which to take part,” said prize co-founder Freidheim. Freidheim is also one of the lead donors of new Tobin Center for Economic Policy announced earlier this summer.