The Department of Economics is proud to announce the recipients of the 2020 Tobin Scholar Prize for their outstanding performance in economic core theory courses. The four seniors are Alya Ahmed, Sebastian Quaade, Jared Rock, and Harry Westbrook. In recognition of their accomplishments, the majors received a cash prize and were presented the Tobin Scholars Mory’s Cup.

The students were recognized for their accomplishments on November 3 over a Zoom call hosted by Director of Undergraduate Studies and Professor of Economics Ebonya Washington. Accompanying the award winners were Department Chair Tony Smith and Professor John Geanakoplos. Also joining the call were the prize co-founders, Chief Investment Officer David Swensen (Ph.D. ‘80) and alumnus Stephen Freidheim (B.A. ‘85), both of whom studied under the prize’s namesake, James Tobin.

“It was the best surprise especially because I have absolutely loved taking all of these core economics classes ,” said Alya Ahmed.  “I am also honored because I admire James Tobin both for his contribution to economics and for his drive to reduce inequality, but also for his supportive teaching style.”

Jared Rock, Harry Westbrook and Sebastian Quaade  said they were also surprised to receive the scholarship. “I was very honored to be receiving a prize named after such a great economist,” said Westbrook. 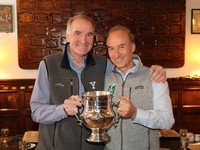 When asked what aspect of the economics major Quaade likes the most, he said he enjoys the approachability of the faculty members. “So many have been so generous with their time.”

Westbrook says he is impressed with the diversity of courses to choose from. “I’ve been able to take classes spanning from health care, to public policy, to data science, all while studying economics.”

Rock said he’s  enjoyed reading and learning about the innovative research studies that economists have pursued. “I have learned about many such studies in Empirical Microeconomics, which I am taking this semester.”

While Ahmed expected to enjoy the applied macroeconomics classes more, she has found the theoretical, general equilibrium classes to be the most fascinating.  “They provide the tools to ask why the world exists as it does through the construction of economic models,” she said.

When asked why the scholars decided to major in Economics, Ahmed and Quaade answered they wanted to understand economics from a more worldly view. “I like the framework it offers to think about the world; economics offers an answer to everything – from whether I should order from Pepe’s or Sally’s to why some countries are more developed than others to the value of a company,” said Ahmed.

On a similar vein, Quaade said, “I wanted to understand why we see so much socioeconomic inequality within and across countries, and to think of ways that this can be addressed.”

As for Rock, he said he likes mathematics to study real-world phenomena which attacted him to the major. ”I wanted to learn how to apply quantitative models and empirical methods to study a wide variety of real-world issues.”

Rock, Westbrook and Ahmed have aspirations to pursue corporate jobs after graduating.  “I’ll be working in finance after graduation, so I’ll definitely be able to apply some of the economics knowledge I’ve picked up at Yale,” said Westbrook. Rock and Ahmed will work in investment banking, with Ahmed saying she is open to continuing her economics educatin in the future.

Quaade says he will use his economics background to pursue a career advancing animal welfare and mitigating climate disaster. “I hope to do so through a carbon market initiative that helps farmers transition out of animal agriculture,” he said.

All four students who were interviewed said they were coping with the COVID-19 pandemic by taking breaks from their screens by taking walks, running, or dancing.