Skip to main content
by Diego Haro
When Zara Contractor moved from India to New Haven to attend Yale College 2013, she was torn about what to study. Growing up in Mumbai, she was intellectually curious and excited to take classes in a wide range of disciplines, from biology to literature to economics. She did not know these explorations would eventually lead her to a PhD in economics.
“I didn’t know what a PhD really entailed.” she recalled. “I knew it was an advanced degree, but I didn’t know what that meant in an econ framework, or what economics research could be.”
But Contractor developed a keen interest in the field after attending a couple economics seminars during her second year on campus, and especially after attending a panel of economics PhD students and faculty. “That was the first time I realized that graduate school is about asking interesting questions and then answering them,” Contractor said. She began to explore economics, and made an impression on others in the Department.
“I met Zara when I was TA-ing for a couple of econometrics courses she took,” said Noriko Amano-Patiño, a Yale PhD, now an assistant professor of economics at Cambridge University. “She made a huge impression on me because she asked very deep questions about the topics we covered, and I learned a lot from answering them.”
Contractor is now pursuing her own PhD in the Economics Department and conducting trailblazing research in labor economics. Most recently, she and her co-authors have studied the impacts of software technology on labor inequality and the effects of employment-based affirmative action policies on racial inequality.

In a recent project, Contractor, Amano-Patiño, and fellow Yale PhD candidate Julián Aramburu, study whether employment-based affirmative action can address the United States’ large racial disparities in employment and wages. Specifically, the research team assesses whether the country’s most widespread employment-based affirmative action program – Executive Order 11246, signed by President Lyndon B. Johnson in 1965 to establish non-discriminatory hiring practices for federal contractors – still has positive impacts in the 21st century. Previous research showed that E.O. 11246 increased the share of Black employees among federal contractors in the 1980s, 1990s, and early 2000s – in part due to improved screening methods – but these studies only utilized data through 2004. 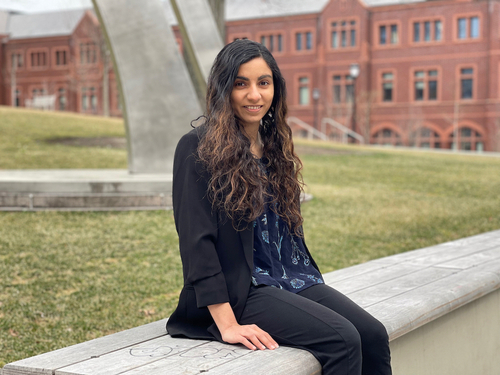 To assess whether the positive impacts of E.O. 11246 continue to persist in recent years, Contractor and her co-authors obtained access to restricted US Census Data and filed Freedom of Information Act (FOIA) requests with the Office of Federal Contractor Compliance to construct the first large-scale administrative database of worker-level information for federal contractors, spanning the period between 2002 and 2011. After assembling and analyzing the data, they were surprised to find no evidence that E.O. 11246 has any significant impact on the share of Black employees among federal contractors in the 2000s – suggesting that the affirmative action program’s effectiveness has weakened over time.
These results have potentially widespread implications. As of 2019, the firms subject to E.O. 11246 employed approximately 20% of the U.S. workforce. Contractor and her co-authors are currently using additional data to better understand and explore the causes of the weakened effectiveness of E.O.11246.    They are testing whether weak compliance with and enforcement of the policy (firms lacking action plans and insufficient audits by the federal government) explain the lack of positive impacts.
“This paper was born while all three of us were students at Yale, where the environment is really friendly,” Amano-Patiño said. “So, the decision of collaborating with peers seems like a natural one to make. This paper was no exception and I feel very fortunate for having both Zara and Julián as my coauthors: I have learned a lot from both.”

Contractor’s current research explores the labor market impacts of society’s increasing reliance on technology in the workplace. When firms adopt new software, how are workers affected?
The economics literature has shown that software adoption often automates middle-income occupations and changes which skills are in demand – which has contributed to faster wage growth for high-wage occupations, wage stagnation for many routine or manual-intensive jobs, and widening inequality.
To explore how these dynamics play out in the labor market, Contractor is collaborating with a coauthor at Burning Glass Technologies, a firm that specializes in labor market data and has an assembled a database of the near-universe of online US job listings. Based on a dataset of millions of job listings between 2007 and 2019, Contractor’s initial findings show how firms that adopt new software (such as cloud computing platforms, human resources software, database tools like Oracle, or programming languages like C++) become more likely to state in their job advertisements requirements for analytic, computer, and social skills (such as the ability to work on a team).
Contractor found that adopting software led firms to be an average of 1.5 percentage points more likely to require skills for the same role – with some types of software such as engineering  and health & safety software  leading to as much as a 4 percentage point increase. Next, she looked at what happens with other jobs at the firm. “I have preliminary results that show that other jobs are affected too,” she explained. “Say, a HR manager at a firm starts using statistical software. It looks like other occupations such as  sales and marketing within that firm show up-skilling – the firm requires more analytic and social skills in those positions too.”
Overall, the study offers additional granular evidence on how firm technology upgrades can drive labor market inequality and have negative impacts on lower-skilled workers. To better understand these forces, Contractor is developing a theoretical model to explore the interaction between technology adoption, hiring and changes in wages – and ultimately how it exacerbates inequality.

In addition to conducting interesting and policy-relevant research, Contractor said that she immensely enjoyed her 9 years on the Yale campus. “There is always a lot going on, both academically and extracurricularly,” she said. In particular, as a graduate student, she has appreciated the Economics Department’s supportive and collegial community. “Working in economics is very collaborative –everyone is enthusiastic about what they do, and about what other people do.”
Contractor has played a role in helping to foster this collaborative community, helping to plan the Herb Scarf program to connect undergraduate economics students with faculty on research assistance opportunities. “Zara is not just an exceptionally talented researcher but also an outstanding citizen of our intellectual and social community,” said Yuichi Kitamura, Alfred Cowles Professor of Economics and Director of Graduate Studies. “I expect that her research, including collaborative work with members of our department, will continue to shed new light on important issues in the labor market, and eventually make significant impacts on policy making.”
Reflecting on her time at Yale, Contractor is grateful that the PhD program has allowed her to deepen the passion for economics that was initially sparked during her sophomore year – and she looks forward to continuing to contribute to the field of labor economics after finishing her doctorate.
“There is a thread on inequality that runs through these papers, I want to continue on that – understanding how to reduce disparities,” she said. “I hope to do something that I’m proud of.”
___
Diego Haro is a senior at Yale studying Global Affairs, and a Communications Intern at the Economic Growth Center.