Former Professor and Nobel Laureate James Tobin is still a much admired figure in the world of economics, even after his passing in 2002. Motivated by the Great Depression, much of Tobin’s research focused on macroeconomics, mainly monetary and fiscal policy. Not only was he respected for his field work, but he was also revered for his mentorship, teaching and advising.

To honor Prof. Tobin and his scholarship, alumni Stephen Freidheim and David Swensen (also Yale’s CIO) created the Tobin Scholars Prize in 2012, which is annually awarded up to four seniors majoring in Economics or Economics and Math for outstanding performance in core theory courses.  To better understand Professor Tobin’s impact the two men and what he meant to them, we posed a few questions to the alumni.

Why did you decide to create the prize?

Stephen Friedheim: Professor Tobin had a profound impact on me. Firstly, he was a central figure in macroeconomics, who opened my mind (and those of hundreds of his students) to a broad spectrum of economic theory from formalized risk theories to specific econometric models, from general macro theory to specific behavioral theories and economic policies. He was a great teacher and a great listener. It was clear that Jim Tobin loved teaching and loved Yale. However, what had the deepest impact on me, was my discovery that his devotion to the study of economics was driven by his awareness of the human and economic waste of the Great Depression, and his desire that his life’s work in this field could make a major difference for the welfare of people. He devoted his energy and vast intellect to the betterment of people and society. He was both brilliant and compassionate.

David Swensen: Steve Friedheim approached me a number of years ago to talk about ways that we might support the Economics Department and honor Jim Tobin. We found that, unlike many other departments at Yale, Economics had few, if any, ways to recognize undergraduates. The solution was simple: create Tobin Scholars to honor academic excellence.

Did you have a connection to Prof. Tobin that led to your creating the prize named in his honor?

SF: Yes, I was his student and he was my senior thesis advisor, so we worked closely while I was a student at Yale in the 80’s. After I graduated we remained in contact. Over the 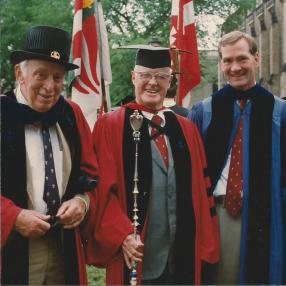 years, he recommended a handful of his students to come work with me in the investment world. Many of these individuals have gone forward and built careers as investors and businesses that are doing very well today. I, along with these professionals, and the many, many others who were impacted by Jim over the years– are proud members of Tobin’s Army.

DS: Jim Tobin had a profound impact on my life. As a teacher, he emphasized the importance of employing first principles when addressing problems. As my advisor, he demanded clear, crisp prose, knowing that sloppy writing often stood side by side with sloppy thinking. As a mentor, he told me to do something with my life that matters and he helped (along with Bill Brainard) to open the door for my return to Yale to manage the Endowment. I’m thrilled that Jim’s memory will be sustained, in part, by the Tobin Scholars.

What has been the students’ reaction to winning the prize?

SF: It’s clearly been positive at least on two levels. First, the prize (awarded to the top students in the economics department by its faculty) has helped revive Tobin’s legacy and his theories both among the students and the faculty. There’s renewed buzz on campus about the great man behind the prestigious prize, which has been so enjoyable for me to witness and in which to take part. Second, the students value the award as evidenced by the resumes that I receive when recruiting for the world’s top undergraduate talent every year. Winners of the Tobin Scholar prize will proudly (and prominently) list the award on their resumes and cover letters. The award is always a topic for conversation during interviews as well.

What advice do you have for undergraduates pursuing a degree in economics?

SF: The great part of the quintessential liberal arts education at Yale was that it taught me how to think. During my four years at Yale I explored arguments and theories (across a myriad subjects). We studied them, took them apart, and learned how thought and theory built upon one other. It opened my mind to appreciate and respect a wide spectrum of thought and methodologies. It taught me how to approach theories critically and how to address questions and problems.

A soft science major like Economics has the advantage of combining the rigor of learning complex theories and formulas within the openness of a real world in which these very theories and formulas get put to the test. Studying great economic theories that eventually failed in the real world, helps develop a critical mind. Tinkering with the details and then thinking broadly, and back again to sweating the detail was great fun. Such mental dexterity that an Economics major develops in a young mind is particularly useful in professional life. Fresh out of Yale on Wall Street the economic, behavioral, and market theories that underpin our economic world, all seemed far less practical than the hard accounting and finance majors that many of my peers had earned. However, one quickly learns the specific technical rules on the job. The advantages of the liberal arts economics major, starts bearing fruit quickly and enduringly– the ability to adroitly manipulate basic and complex relationships within and among businesses and markets with a critical mind is useful throughout so many professions in investing, finance, business (both old and new economy) and consulting (and likely many other endeavors).

Today (just as it was in the 80’s), Economics is a major where you justly get out what you put in. At Yale the Economics major has tremendous breadth of subject matter and levels of difficulty. There are heavily quantitative courses that can challenge the brightest mathematical minds, theoretical and conceptual courses for the finest abstract thinkers, rigorous courses, as well as easier courses with lower workloads. I’d encourage all Economics majors to put aside any fear of workload or difficulty, to challenge yourselves, to choose courses that excite and test your young minds, and you’ll reap the benefits throughout your careers.

Finally, if you have the opportunity to study under a teacher like Jim Tobin or David Swensen– by all means grab it! Yale is blessed to have great professors, scholars and TA’s. From them you can learn far more than just great theories (and, yes, you will be exposed to amazing ways of thinking)– you will gain exposure to deeply principled men and women that may inspire you throughout your careers. Such life lessons can be invaluable deep into your career, as I have found. From Jim’s example, his students were exposed to many of life’s principles– many of which guide my business today– intellectual honesty in all aspects of ones work, clarity and precision in the expression of all ideas, respect for all people, unabashed competitiveness, and personal modesty. Incredible that a man of Jim Tobin’s stature and accomplishments gave his students the lesson of modesty. 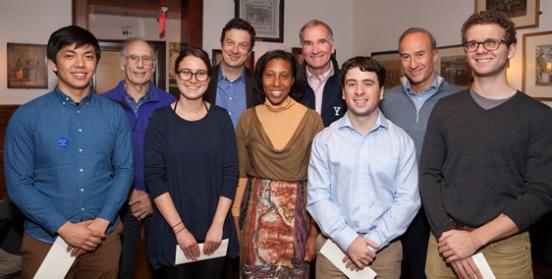 SF: Yes, I created the prize with David Swensen. David in many ways embodies all the best virtues that I so admire in Jim Tobin. David, like Jim, has advanced economic and portfolio theories that are brilliant and impactful. In addition, like Jim, David’s luminous scholarship, beautiful mind and tireless energies are devoted to the betterment of Yale and society more broadly. David has accomplished this firstly by developing and implementing portfolio theories that have radically reshaped Yale’s endowment, which has allowed for such things as need-blind admissions (which didn’t exist when I was a student at Yale). David’s greatest gift to society to date, however, may be that he continues to develop his own army dedicated to helping other institutions of higher learning and charitable organizations by implementing these portfolio investment theories. In doing so, David’s impact on the welfare of society and so many individuals is profound, enduring, and growing. So, it is wholly appropriate that David Swensen is the one to hand out the Tobin Scholar prizes every year to the winning students.

Stephen Freidheim is the CIO, Founder and Managing Partner of Cyrus Capital Partners.  He co-founded the predecessor company in August 1999.  He was Managing Director and Partner at Bankers Trust Company and head of its Capital Management Group from 1993 to 1999, where he was responsible for proprietary trading and client investments in high yield and distressed.  In addition, he was Chief Investment Officer of Fixed Income.  He was the Director of Research and Trading and a member of Board of Directors for Nomura Corporate Research & Asset Management from 1990-93.  Mr. Freidheim started his career at Kidder, Peabody in 1986, where he became its youngest-ever Vice President and was Director of High Yield Research at Kidder, Peabody Asset Management until 1990.  He serves on several boards and committees including the Council on Foreign Relations, the Peterson Institute, the Children’s Home & Aid Society of Illinois, and the U.S. Olympic Committee. Through his foundation he supports child education. He graduated from Yale University with a B.A. in Economics in 1986.

David Swensen is Yale’s CIO, overseeing $22 billion in Endowment assets and several hundreds of millions of dollars of other investment funds. Under his stewardship during the past 28 years the Yale Endowment generated returns of 13.8 percent per annum, a record unequalled among institutional investors. Mr. Swensen leads a staff of 30, located near the University’s campus in downtown New Haven. Prior to joining Yale in 1985, Mr. Swensen spent six years on Wall Street–three years at Lehman Brothers and three years at Salomon Brothers–where his work focused on developing new financial technologies. At Salomon Brothers, he structured the first swap, a currency transaction involving IBM and the World Bank. Mr. Swensen authored Pioneering Portfolio Management: An Unconventional Approach to Institutional Investment and Unconventional Success: A Fundamental Approach to Personal Investment, both published by The Free Press, an imprint of Simon & Schuster. His books have been translated into Chinese, Japanese, Korean, German, French, Spanish, Italian, and Portuguese.