As the COVID-19 pandemic grips the world, Yale Department of Economics faculty members are researching how the disease is affecting economic policy. Below are excerpts of articles on COVID-related studies.

A report on the Coronavirus Aid, Relief, and Economic Security (CARES) Act found no evidence that the enhanced jobless benefits Congress authorized in March in response to the COVID-19 pandemic reduced employment. 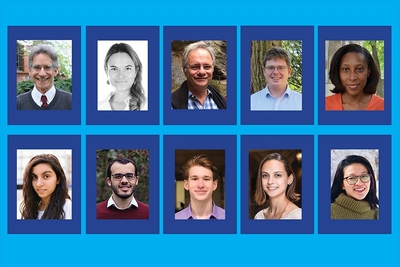 The report concluded that workers receiving larger increases in unemployment benefits experienced very similar gains in employment by early May relative to workers with less-generous benefit increases. People with more generously expanded benefits also resumed working at a similar or slightly quicker rate than others did, according to the report.
The study was authored by Zara Contractor, Lucas Finamor, and Dana Scott (primary author), Ph.D. candidates in the Department of Economics; Ryan Haygood, a rising senior in Yale College and research assistant at the Tobin Center; Joseph Altonji, the Thomas DeWitt Cuyler Professor of Economics; Ilse Lindenlaub, assistant professor of economics; Costas Meghir, the Douglas A Warner III Professor of Economics; Cormac O’Dea, assistant professor of economics; Liana Wang ’20 B.A., an undergraduate research assistant; and Ebonya Washington, the Samuel C. Park Jr. Professor of Economics.
“The data do not show a relationship between benefit generosity and employment paths after the CARES Act, which could be due to the collapse of labor demand during the COVID-19 crisis,” said Altonji.
More here: https://economics.yale.edu/news/yale-study-finds-expanded-jobless-benefits-did-not-reduce-employment
Yale Labor Survey Tracks U.S. Labor Markets in Real Time
A team of social scientists led by Nobel Prize-winning Yale economist William Nordhaus has pioneered a new approach to

appraising the state of the U.S. labor market in real time.
The Yale Labor Survey (YLS) uses online panels of respondents to provide rapid and inexpensive information on employment, unemployment, and other labor-market measures. The YLS parallels the approach of the monthly Current Population Survey (CPS), the official source of labor force statistics in the United States.
The YLS found a high level of labor-market stress in April 2020 and then tracked a slow improvement in conditions from April to June. Looking at weekly numbers, the YLS found that the unemployment rate for the population aged 20 years old and over peaked at 19% at the end of April. It then declined to 17% in mid-May and to 15% in the middle of June.
The report also compares the YLS estimates with the official government estimates. During the past three CPS surveys — which are conducted during the calendar week that includes the 19th of each month — the YLS estimated the unemployment rates of 18% for April, 17.2% for May, and 15.3% for June 2020 for the 20-plus population. The numbers for April and May were generally consistent with government figures on unemployment from the CPS, once the CPS data are adjusted for potential employment-classification errors caused by the unique nature of the pandemic.
More here: https://economics.yale.edu/news/yale-labor-survey-tracks-us-labor-markets-real-time

Yale researchers recently surveyed 909 households in Cox’s Bazar, a coastal city in southeast Bangladesh, to better understand the prevalence of COVID-19 symptoms among the 900,000 Rohingya refugees living in overcrowded camps and their host communities, and how best to stop the disease’s spread. Informed by the survey data, the researchers are working with the United Nations High Commissioner for Refugees (UNHCR) to develop and implement evidence-based policies to protect the Rohingya community and its neighbors in Cox’s Bazar.

The study, co-authored by Mushfiq Mobarak,  professor of economics with joint appointments in the Yale School of Management and the Department of Economics, shows that about 25% of respondents in the camps and more than 13% in host communities reported experiencing at least one common COVID-19 symptom.
“This is a uniquely vulnerable population living in densely packed conditions where social distancing is extremely difficult,” said Mobarak. “If the virus is spreading in Cox’s Bazar, it poses a huge danger not only to the Rohingya and their host communities, but to the world. The data is helpful to devise evidence-based policy prescriptions that we can now implement in partnership with UNHCR to prevent outbreaks.”
More here: https://economics.yale.edu/news/yale-survey-refugees-bangladesh-aims-help-prevent-covid-19-spread
Smartphone Data Shows How Shared Staff Spread COVID-19 through Nursing Homes
Nursing homes and other care facilities in the United States have been devastated by COVID-19, accounting for nearly half of

all U.S. deaths from the pandemic. Infections have spread despite a ban on visitors to the facilities imposed by the Centers for Medicare and Medicaid Services (CMS) in March.
A new study co-authored by Yale School of Management’s Judith A. Chevalier finds one likely explanation: staff members who work at multiple nursing homes. Using smartphone location data, the authors find that the movement of people among the facilities is associated with increased infections. They estimate that banning shared staff could reduce infections by 44%.
The full article by Ben Mattison can be found on the Yale School of Management’s website: https://insights.som.yale.edu/insights/smartphone-data-shows-how-shared-staff-spread-covid-19-through-nursing-homes
Economist Pinelopi Goldberg Switches Gears to Study the Pandemic
At the start of the pandemic, Yale economist Pinelopi Goldberg wasn’t working on anything related to global health. But like

many scholars, she has recently shifted her research focus to questions bearing on the COVID-19 pandemic.
The former chief economist at the World Bank Group is now studying policy responses to the crisis in developing countries and collaborating with colleagues at Yale’s Economic Growth Center to collect data on COVID-19’s effects on low-income populations.
Goldberg, the Elihu Professor of Economics in the Faculty of Arts and Sciences, recently spoke to YaleNews about contrasts between rich and poor nations, the risks of lockdowns, and scholarship in a time of crisis.
The full article can be found on the department’s website: https://economics.yale.edu/news/economist-pinelopi-goldberg-switches-gears-study-pandemic
In Progress: A Tool to Help Policymakers Safely Re-open the Economy
Governments across the globe have imposed strict lockdowns to slow the spread of COVID-19. These measures have reduced

infection rates, but also triggered the most severe economic collapse since the Great Depression.
Yale economist Fabrizio Zilibotti is working with Hong Kong-based researchers Rongzhu Ke and Zheng Song to develop a predictive model for guiding policymakers as they try to restart economies safely. An expert in inequality in children’s education, Zilibotti is also studying the unequal effects of pandemic-related school closures on children.
The Tuntex Professor of International and Development Economics in the Faculty of Arts and Sciences, recently spoke to YaleNews about his work.
More here: https://economics.yale.edu/news/progress-tool-help-policymakers-safely-re-open-economy
Reaching India’s poorest women with Covid-19 relief

A study by Economics Professor and Director of the Economic Growth Center Rohini Pande, along with coauthors Simone Schaner, Charity Troyer Moore, and Elena Stacy, finds that distributing emergency cash payouts only using India’s digital banking program may exclude the majority of poor women.
The research found that more than half of poor women were likely excluded from the Indian government emergency COVID-19 relief cash transfer program which sent 500 rupees per month from April-June 2020. Furthermore, one in five poor women live in households that lack ration cards, which typically grant access to the central food ration system.
More here: https://egc.yale.edu/reaching-indias-poorest-women-covid-19-relief
Managing roiling labor markets amid COVID-19
The COVID-19 pandemic is wreaking havoc on the economy. Businesses struggle to stay afloat. Unemployment is

28 and April 20,  offers insight into how small businesses have responded to economic uncertainty amid the COVID-19 crisis. It shows that business owners have become increasingly pessimistic about their company’s prospects despite federal relief efforts. It also provides evidence that owners of the smallest businesses — those with fewer than 10 employees — are often unaware that state and federal aid programs exist. Even when owners are familiar with government programs, their misconceptions may have discouraged them from participating.
“The COVID-19 crisis presents severe challenges for all small businesses, which account for the majority of companies in the United States,” said Humphries who is the principal investigator on the project. “The data and insights we’ve collected can help policymakers design and implement effective measures to support small businesses in these extremely challenging times.”
More than 60% of respondents reported laying off at least one employee due to the pandemic, and 31% stated that they expected to have layoffs within the next 60 days. A quarter of respondents don’t expect to ever recover, and 31% reported believing that they have a 50% chance of going bankrupt or out of business within the next six months.
More here: https://economics.yale.edu/news/survey-shows-pandemics-severe-impact-us-small-businesses