Ahyan Panjwani was one of eleven graduate students awarded with the 2019-20 Prize Teaching Fellowships for their work as teaching fellows. The prize recognizes outstanding performance and promise as a teacher, and is considered among the most important honors that Yale bestows upon graduate students.

Panjwani, a fourth-year Ph. D. student, was a teaching fellow (TF) for Professor William Nordhaus for the Intermediate Macroeconomics course during fall 2018 when he was nominated for the prize. “The award means a lot to me,” he said. “Teaching well is an essential component of my academic life at Yale, and the award suggests that I was able to connect with the students well.”

The first Economics student to receive the prize in ten years, Panjwani is grateful to Professor Nordhaus for his support. He is also appreciative of his advisers Professor Eduardo Davila and Professor John Geanakoplos, for their mentorship.

“Ahyan Panjwani is an unflappable and reassuring presence in the classroom, with a keen sense for what students will find accessible and attractive,” said Professor John Geanakoplos.

Panjwani’s research interests are in macroeconomics and finance with his current work focusing on monetary policy in various crisis settings like the Great Recession in the U.S. and currency crises in emerging markets. And it is these topics he brings to the classroom.

“Many misconceptions exist about macro and monetary economics due to the Great Recession,” said Panjwani. “It is vital to communicate some of the essential concepts of the field to our students so that they are informed members of the community. “ 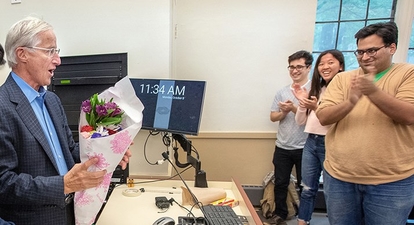 Seeing the students progress over time is the most meaningful aspect of being a TF, according to Panjwani.  “I’ve had some students for multiple courses now, and to see them grow intellectually and holistically is very satisfying,” he says.  “Moreover,  teaching at the undergraduate level gives me a perspective of the progression of knowledge in macroeconomics and finance. “

When asked what advice he has for his fellow TFs, Panjwani said, “Connect with the students. Make the students realize that we are not here to trip them by creating unnecessary hurdles and difficulties for them. Merely asking a student about their week during the middle of the semester can make them more interested in the section material.”

Given annually by the Graduate School of Arts and Sciences since the 1999-2000 academic year, the prize is based upon excellence in performance as Teaching Fellow or Part-Time Acting Instructor.  Recipients are nominated by their students and the faculty members they assist, and are awarded a $3,000 stipend for the following academic year. To be eligible for prize selection, graduate students must be making satisfactory progress towards the Ph.D. degree, and are nomined by undergraduate students and by supervising faculty. All doctoral candidates are expected to serve as teaching fellows for a semester or more during their time at Yale.

This year’s fellows were honored at a reception and dinner on November 12, 2019, hosted by Lynn Cooley, Dean of the Graduate School and Marvin Chun, Dean of Yale College.

For more information on the award, visit the Prize Teaching Fellow webpage.