“I am honored to be awarded the Nobel Prize in Economics for work on environmental economics,” Nordhaus said. “But even more, I am grateful for the intellectual environment at Yale that taught me as a student, nurtured me as a teacher and scholar, and allowed the freedom to devote my life to one of the critical emerging issues of humanity.”

Watch a press conference held in recognition of the award at the Yale School of Management.

Nordhaus’ research has focused on economic growth and natural resources, the economics of climate change, and resource constraints on economic growth. Since the 1970s, he has developed economic approaches to global warming, including the construction of integrated economic and scientific models (the DICE and RICE models) to determine the efficient path for coping with climate change. These models are widely used today in research on studies of climate-change economics and policies. He has also studied wage and price behavior, health economics, augmented national accounting, the political business cycle, productivity, and the “new economy.” 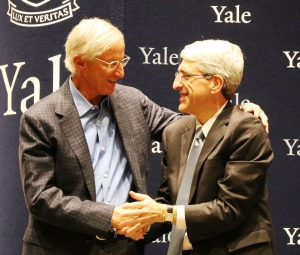 Born in Albuquerque, New Mexico, Nordhaus completed his undergraduate work at Yale in 1963 and received his Ph.D. in economics in 1967 from the Massachusetts Institute of Technology. He joined the Yale faculty in 1967 and in 2001 became a Sterling Professor of Economics — the highest honor given to a Yale faculty member. He is also a professor in Yale’s School of Forestry & Environmental Studies.

From 1977 to 1979, Nordhaus was a member of the President’s Council of Economic Advisers; from 1986 to 1988, he was provost of Yale University. He has served on several committees of the National Academy of Sciences on topics including climate change, environmental accounting, risk, and the role of the tax system in climate change.

His 1996 study of the economic history of lighting back to Babylonian times found that the measurement of long-term economic growth has been significantly underestimated. He returned to Mesopotamian economics with a study of the costs of the U.S. war in Iraq, published in 2002 before the war began, projecting a total cost as high as $2 trillion. He directs the “G-Econ project,” which provides the first comprehensive measures of economic activity at a geophysical scale.

Nordhaus is current or past editor of several scientific journals and has authored many books, among them “Invention, Growth and Welfare, Is Growth Obsolete?”; “The Efficient Use of Energy Resources”; “Reforming Federal Regulation”; “Managing the Global Commons”; “Warming the World”; and (jointly with Paul Samuelson) the classic textbook “Economics,” whose 19th edition was published in 2009. His book on economic modeling of climate change, “A Question of Balance,” was selected by Choice magazine as an Outstanding Academic Title of 2008. His most recent book, “The Climate Casino: Risk, Uncertainty, and Economics for a Warming World,” was published in 2013. 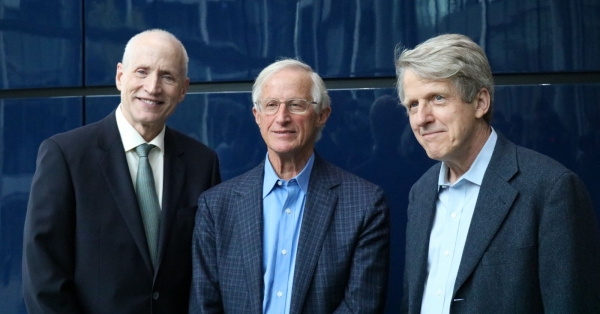 Nordhaus is a member of the National Academy of Sciences and a fellow of the American Academy of Arts and Sciences. He is on the research staff of the National Bureau of Economic Research and the Cowles Foundation for Research at Yale and has been a member and senior adviser of the Brookings Panel on Economic Activity, Washington, D.C., since 1972. He served as the chair of the Board of Directors of the Boston Federal Reserve Bank from 2014 to 2015.

He received the BBVA Foundation’s 2017 Frontiers of Knowledge Award for his work on climate change.

Nordhaus lives in downtown New Haven with his wife, Barbara, an assistant clinical professor for social work at the Yale Child Study Center.

Video: William Nordhaus on the economics of climate change